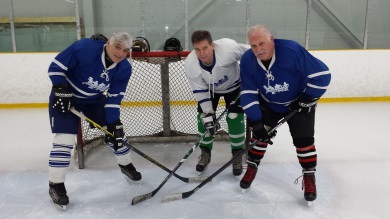 Richard and Carl, the creative team behind Bench the Stench, grew up in Kirkland Lake and Sturgeon Falls, respectively, in Northern Ontario, where hockey pretty much ruled their entire lives.

Richard is a business manufacturing and packaging consultant and entrepreneur; Carl is a successful Commercial Mortgage Broker with a major public real estate company and Brian, the third partner, is principal in his own chartered accountancy firm. Several decades on, like many Canadians, Richard, Carl and Brian continue to play two or three times a week in recreational leagues.

As much as they both love the game, the team has always had a couple of issues about their beloved sport. Beyond the lack of a Canadian Stanley Cup-winning team in recent years, another—dare we say, more pressing problem—has been being forced to dress in damp and smelly equipment for every game. That was the result of storing sweaty equipment fresh (not) from a game in a dank basement, cold garage, outdoor shed—anywhere family members wouldn’t be knocked out by the odiferous stench of odour-causing bacteria happily nesting in a zipped up hockey bag.

It was over the traditional post-game beers and wings that this dilemma was pondered on numerous occasions, with a number of would-be solutions offered up. Soon they were building cabinets in their basements, testing them on their own equipment. After several more actual demonstration models were pilot-tested on teammates and other players, the results tracked and verified, patents applied for and manufacturer’s sourced, Bench the Stench was born.

Today, Bench the Stench is doing exactly what it was intended to do—drying and refreshing pads, pants and skates in just 3 to 4 hours—not to mention leaving families breathing a whole lot easier.